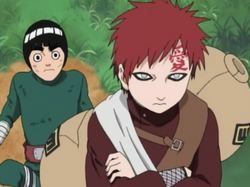 GaaLee (ガーリー GaaLee) is the term used to refer to the romantic relationship between Gaara and Rock Lee.

Gaara and Lee met during the Chuunin Exams, and later they fight in the preliminaries. During their fight, Lee used the Reverse Lotus (Ura Renge) in attempt to win the battle, but Gaara survived by turning his gourd to sand to cushion him. However, Lee's technique took a massive toll on his body. Gaara who lost his temper a bit during the battle, added to Lee's injury by crushing his left arm and leg. Due to those injuries the medics predicted that he would never be able to be shinobi again. Thanks to Tsunade he was able to recover and survive an 50% chance surgery.

During Sasuke Retrieval arc, Lee fought Kimimaro and nearly got killed, had it not been for Gaara's intervention.

Gaara told Lee that he had been faster and stronger the last time they fought, and Lee replied that thanks to Gaara he went through a lot trouble, although he didn't held a grudge against him. Lee still wanted to fight but Gaara stopped him telling Lee that he was still in no condition to fight.

During his fight against Kimimaro, Gaara used his sand to protect Lee too. Lee repeated expresses amazement at Gaara's skill and ingenuity with the sand, and after they are able to "defeat", or rather, outlast, Kimimaro, the two sit under a tree together and discuss the fight.

Gaara laments that had Kimimaro not suddenly died of his illness, both Gaara and Lee would have died. Lee argues that luck is another part of skill, so their victory is a legitimate one, advice he'd been given by Guy before. Gaara compares Lee's devotion to Guy to Kimimaro's devotion to Orochimaru, noting that while Lee's idol was indeed good and loving, that same kind of passionate devotion could be aimed towards a bad man, like it had been in Kimimaro's case. Lee wonders about the comparison.

After the battle, Gaara helps the injured Lee back to Konoha by draping each others arms over the other's shoulders and walking back leaning against each other for strength.

There's not much interaction between Lee and Gaara in part II. During the Kazekage's Rescue arc, Lee, together with the rest of Team Gai, joined Team Kakashi in the mission to save the Kazekage Gaara that was kidnapped by the organization Akatsuki.

Birth of the Ten-Tails' Jinchuuriki

Lee is helping Guy and walking with Tenten when he suddenly notices Gaara's sand flying past them. He wonders what that could mean.

When Guy opens the Gate of Death and Kakashi explains that the move will kill Guy, Gaara recalls the time when Guy saved Lee from him during the chuunin exams. Gaara shows concern for Lee, since his beloved teacher was going to die, but Lee assured Gaara that he couldn't show pity for Guy because this was his teacher's choice and he was going to support it.

Minato asks Gaara and Lee to support each other while they assist Guy in his fight against Madara.

After the battle, Naruto saves Guy's life and leaves the injured Guy for Lee and Gaara to watch over. Gaara carries Guy safely away from the crossfire of the war.

When Madara attempts to drop the massive earthen debris on the ground, Gaara asks Lee to leave there quickly, but later they both fell victim to the Infinite Tsukuyomi.

When Naruto and Sasuke release the Infinite Tsukuyomi, Gaara and Lee are freed from its binds and wake up together on either side of Guy.

Community content is available under CC-BY-SA unless otherwise noted.
Advertisement