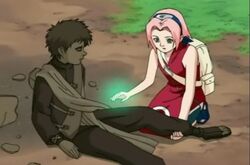 GaaSaku (Japanese ガアサク) is the term used to refer to the romantic relationship between Gaara and Sakura Haruno.

Gaara is pursued by the members of Team 7. Sasuke, who has chased after the maddened Gaara to finish their battle, is followed by Naruto and Sakura. Upon Naruto and Sakura's arrival, Gaara had already transformed half-way into his Tailed Beast form. As Gaara attempts to finish off Sasuke, Sakura jumps to his aid. Sakura's sudden act causes Gaara to remember his betrayed childhood before he pins her to a tree with his sand, later being saved by Naruto and Sasuke.

Team Kakashi and Team Guy go after the Akatsuki to retrieve Gaara, but by the time Team Kakashi arrived, Shukaku had already been extracted from Gaara, resulting in his death. Sakura and Chiyo arrive soon after; not knowing of his death yet, Sakura tries to revive Gaara, though her efforts are fruitless. However, Chiyo resurrects Gaara with the help of Naruto's chakra, using her life-restoring technique at the cost of her own life.

After Kurama was extracted from Naruto, Gaara carried him on his sand to Tsunade and asked for her assisstance in healing him. Tsunade replied that she had no chakra and suggested that Sakura take her place. Gaara complies and takes Sakura on his sand and takes her and Naruto to Minato, where they would seal Kurama's other half into Naruto.

Though not terribly mainstream, GaaSaku is still fairly popular. It's the most popular hetero Gaara couple in the fandom rivaling GaaMatsu, and is surpassed in popularity only by the shounen-ai couples GaaLee and GaaNaru.

According to a survey taken on deviantART, fans like the two together because 'opposites attract.' They think that since both of them have been hurt by the ones they loved (Gaara by Yashamaru and Sakura by Sasuke), the two could help each other get through that pain and develop a relationship. The way the two look together also play a small role in it.

Community content is available under CC-BY-SA unless otherwise noted.
Advertisement